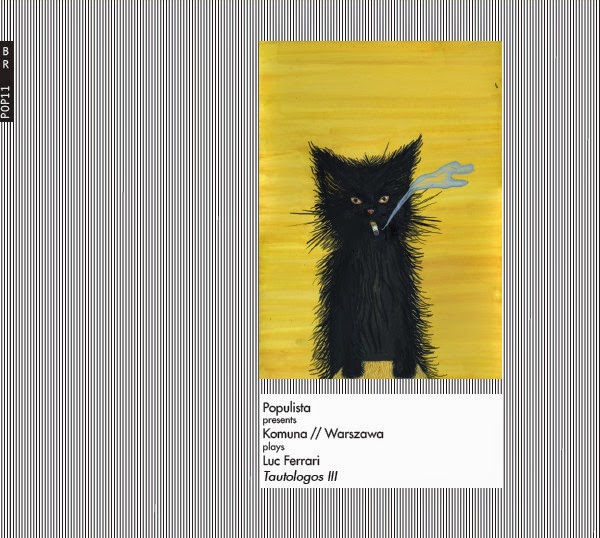 In 2011, the prose score of „Tauologos III”, served as framework for a chamber opera prepared in Komuna// Warszawa. Its core element consisted of three separate performances of a short fragment of Alfred Schnittke's String Trio. Violinist (Julia Kubica), violist (Wojciech Walczak) and cellist (Filip Rzytka) played their own parts of the given movement one after the other. Their performances were recorded live and finally overlapped and played back with no synchronization. The procedure was sprinkled and scattered by dance movements and lecture dealing with notions of division of labor in music informed by both sociological and musicological insights into the topic (references to Max Weber, Emile Durkheim, Jacques Attali and Christopher Small). Album release is an updated and re-recorded version of the performance and hopefully a self-explaining tautology as well.

One of three completely different albums intersecting in a territory of interpretation, overinterpretation and misinterpretation of music – beloved themes of Populista. Lucier and Ferrari albums may seem heterodoxical if not simply wrong, especially if compared with previous phonographic releases. Yet literally speaking, none of them violate the instructions of the scores and Populista is perversly proud to state that this time nothing forbidden by the composers have been done here. „Tautologos III” and „Chambers” are radically open forms, presuming a creative approach from the interpreters and this was taken seriously in search of the content that seems close to the music ideas of the composers. Tartini release is more of a classical Populista approach. It deliberately breaks the instructions given by the composer in the name of some other features introduced by the composer himself.