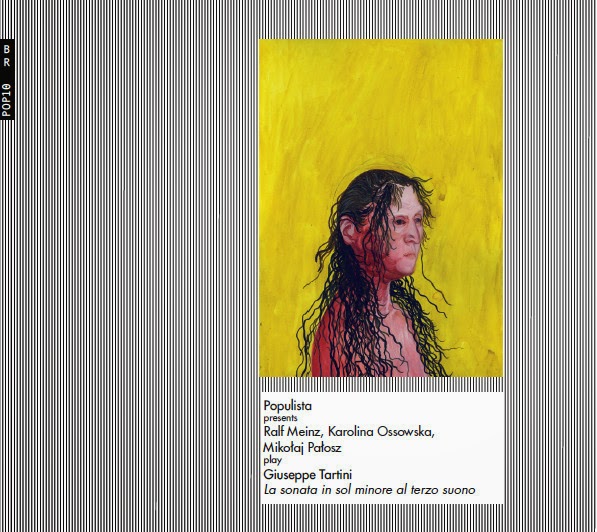 Apart from being a prolific Italian composer, Giuseppe Tartini was also a violin teacher and a theorist. Out of close analysis of intonation, he became interested in a long known phenomena of mysterious third tones which sometimes appear when only two sounds are articulated. He called them „il terzo suono” and was the first one to develop a written down theory of what we now know as combination tones. In his "Trattato di musica secondo la vera scienza dell'armonia” published in 1754 he laid out a mathematical proof of third tone's pitch as either sum or difference of the other two articulated pitches. The idea behind the performance of Karolina Ossowska (violin), Mikołaj Pałosz (cello) and Ralf Meinz (recording) was to search for the combination tones in Tartini's own music. In order to make it audible, we decided to follow the path of a never-mention-his-name-because-you-will-be-in-debts composer, also interested in combination tones, who famously stretched durations of each note in a serial music piece which resulted in one of the milestones of minimal music.

One of three completely different albums intersecting in a territory of interpretation, overinterpretation and misinterpretation of music – beloved themes of Populista. Lucier and Ferrari albums may seem heterodoxical if not simply wrong, especially if compared with previous phonographic releases. Yet literally speaking, none of them violate the instructions of the scores and Populista is perversly proud to state that this time nothing forbidden by the composers have been done here. „Tautologos III” and „Chambers” are radically open forms, presuming a creative approach from the interpreters and this was taken seriously in search of the content that seems close to the music ideas of the composers. Tartini release is more of a classical Populista approach. It deliberately breaks the instructions given by the composer in the name of some other features introduced by the composer himself.