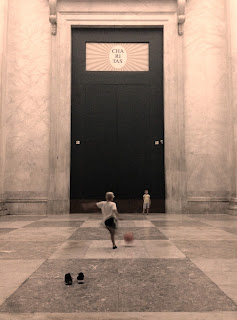 [I]t seems necessary to let the question of the right to music resound according to a somewhat different formulation: What place does a musical work assign to its listener? How does it require us to listen to it? What means does it put into play to compose a listening? But also: What scope, what space for play does a work reserve, in itself, for those who play it or hear it, for those who interpret it, with or without instruments? […] Who has a right to music? This question can also be reformulated thus: What can I make of music? What can I do with it? But also: What can I do to it, what can I do to music? What do I have the right to make of, do with or to music?
- Peter Szendy

[M]inor no longer designates specific literatures but the revolutionary conditions for every literature within the heart of what is called great (or established) literature. Even he who has the misfortune of being born in the country of a great literature must write in its language, just as a Czech Jew writes in German, or an Ouzbekian writes in Russian. Writing like a dog digging a hole, a rat digging its burrow. And to do that, finding its own point of underdevelopment, his own patois, his own third world, his own desert […] How many people today live in a language that is not their own? This is the problem of immigrants, and especially of their children, the problem of minorities, the problem of a minor literature but also a problem for all of us: how to tear a minor literature away from its own language, allowing it to challenge the language and making it follow a sober revolutionary path? How to become a nomad and an immigrant and a gypsy in relation to one's own language?
- Gilles Deleuze and Félix Guattari


Clearly – an impossible task: to perform the entire LICHT cycle in one go and to do it solo. Or "Tristan and Isolde", a capella. A mere provocation or a megalomaniac curatorial gesture – inevitably it is, admitted. But at least it does not even bare the slightest trace of temptation for a new rendition of a classical piece. "Minor Music" is not about that. It is rather about a solitary caught at night in a majestic room of an exquisite museum, alone, staring at a breathtaking painting. Being arrested. In love. Frustrated. Intimidated. Then hating it. Then again admiring. It may all be there. Being subjugated and then subjugate, facing virtuous blackmail but then also and by the same necessity – a cheap one, as all blackmails including the greatest ones, inevitably are. Rivarly, appreciation and affluence too, who knows – they may also float there in the air of that grandeur institution.

It indeed may feel like on the desert. A survival despatch, in solitude. Take only necessities, think twice and go. Be in danger, face insoluble situations and resolve them. Meet your enemies and try to speak their language. If you can, cheat the wind, become minor, rescale your limbs. Novelty does not necessarily work here, fashion does not even exist. There is no easy way out. But you may always try and climb a giant beast, lean on its back and check the smell of its fur.

Hypothetically, we all do that when listening to the music we find great. Hypothetically, it all haunts us in the quiet retreat of our own, inner listening, when we dare to ask shameless questions, shift the tone a little darker, swap lines to understand asymmetry, tear off tapestry to see its weight. Hypothetically, we inhabit these kinds of deserts and museums in our listening, we get less cowardly in this silence, we claim rights, we may go as far as owning a piece of land for a moment or two, just as long as it all remains tacit. As long as it remains soundless, private, domestic, it happens to be our everyday listening. In "Minor Music" it may perhaps become somewhat audible, in public, in the noble setting of Donaueschinger Musiktage.


Eugene Chadbourne is the only one of the invited artists of "Minor Music" who already conceived his first version of his project. An attempt on the music of Johann Sebastian Bach being armed with banjo only and on top of that calling it "German Country and Western" may seem funny, even ridicule or provocative. But it may only feel so if you have never heard it. If you have, then you know it is no joke, neither nostalgia and in the least a gag. If you have, these seeming jokes are no pranks anymore. Perhaps Chadbourne's performances of Bach may also be a clue that conceptual music takes each and every piece of cloth in order to self-smuggle. There is a vast space for statements in the most temperate forms of music making. Then no words can flip the lines of tradition, aesthetics and judgement better than the banjo fingering does. In Donaueschingen Eugene Chadbourne will continue his inquiry into German country and western music in the landscapes of "Goldberg Variations".

"Isolde, Brangäne and Marke" by Barbara Kinga Majewska is not going to last 4 hours and although based on Richard Wagner's opera, it will be as far from the harmonic orgy of the original as possible. A solo vocalist with no tape and no electronics. Majewska is rather on the path opened up already by Friedrich Nietzsche, an advocate of stepping away from the pompous Teutonic masculinity of Wagner and replacing it with a minor femininity. The scale, the harmony, the mass of sound, the volume are all reduced to several motives revealing the turnpikes of the myth and its sonic covering. Focusing on Tristan's gaze, Majewska finds it to be a crucial dramaturgical point of Wagner's rendition of the myth. Not unlike Homo Sacer, Tristan appears to be an outcast who suspends the law – law of state, law of social strata, law of customs – by a mere, if not minor, "passive activity" of his penetrating gaze.

As part of the "Minor Music" program, Alex Waterman will present a new 29-minute song cycle for voice and electronics with his own staging and light design: "Urantia!". "Urantia!"is a comic opera about the Kellogg brothers, Dr. Sadler and the mysterious "Sleeping Man", a post-war German composer, and "the importance of a good breakfast."
Autor: Michał Libera o 14:41 Brak komentarzy:


Following the exhibition Sanyofikacja. Cud reprezentacji at the Muzeum Sztuki in Łódź, Budapest Group continue exploring the 2½ dimension. They look into the structure, rules of action and aporias of the world, which has existed for centuries in parallel with the three-dimensional world we have known and which has been theorized and practiced by dozens of scientists and artists, from Tycho Brache to Ken Jacobs. The 2½D world is a two-dimensional world that constantly produces illusory 3D objects. And vice versa: it is a world of three dimensions which camouflages 3D objects by flattening them and merging them into the background. The exhibition in Łódź focused on a two-dimensional world leaning towards a 3-dimensional one. In Szczecin, the Group takes up the opposite direction, starting with the familiar 3D world and reducing it by half a dimension to show a number of camouflage strategies. The exhibition features several new works by Grupa Budapeszt, from sculptures and paintings, through films and objects, to light and sound installations. Edwin A. Abbott writes in one of the opening sentences of his book Flatland: A Romance of Many Dimensions: Imagine a vast sheet of paper on which straight Lines, Triangles, Squares, Pentagons, Hexagons, and other figures, instead of remaining fixed in their places, move freely about, on or in the surface, but without the power of rising above or sinking below it, very much like shadows – only hard and with luminous edges (…).
If, according to the above, flatland is a land of shadow that is not cast by a body, the land surrounding Tadzio at the exhibition in TRAFO is the world of bodies that deprive each other of shadows. It may be viewed as a territory of perfect camouflage, a place where all heterogeneous elements fit so perfectly that it is impossible to distinguish them from one another. Others may perceive this area as puzzles – an arrangement of components with one possible configuration in which none of them is redundant. Both interpretations are right since every object in the 2½D reality has a double identity – it is both itself and the camouflage it provides for other object that can conceal itself in such camouflage in a precisely defined relationship with the first object. In other words, each orange half has only one other half to match. It drifts towards the second half, to stopping in it, to stillness and fulfillment. Needless to say, the other half is not the other half of the same orange, but an empty space to which it “clings” and becomes invisible. The words quoted above could be paraphrased in the following manner: Imagine Lines, Triangles, Squares, Pentagons, Hexagons, and other figures unable to move about in space, since they immediately begin to create new shapes and connections with other figures, thereby losing their identity. Imagine a space in which they remain static and so perfectly adjacent that nothing else can fit into it, including a ubiquitous look.
Autor: Michał Libera o 07:19 Brak komentarzy: