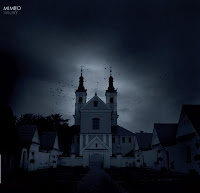 Recorded on 14th of November 2009 in Wigry by Zosia Gołębiowska and Rafael Toral
Mixed and mastered in 2010 at Piethopraxis, Cologne

MIMEO performed in the church. The evening was dark, cold and windy. Each of the musicians had a separate loudspeaker and was seated by the long table placed between two rows of the benches. Almost like a last supper. Everybody believed it was the final event in the cultural programme of the Residential Arts Centre. Due to some mysterious decisions the Centre was running for one more year and was shut down on May 1st 2011. No other cultural event after MIMEO happened in the church.

I know everybody is laughing at it and I also realize it is missing the point for many reasons but... my phantasy is that MIMEO is today's Duke Ellington Orchestra (Rafael Toral being Johnny Hodges for sure...!). Yes, of course, I know, there is no Duke here but how about everybody's having such a clear and autonomous voice – immediately recognizable sound, particular way of playing, maybe even a method?

I believe this is why the set up in Wigry with separate loudspeakers for each musician worked that well. One, because of the difficulties with setting up the stage for ten musicians and two, because everybody played a single line. So despite a regular church reverb there was no cloud of noise but 10 people really playing at the same time; all the sounds in the air really coming from somewhere or rather from someone.

Clarity of separate loudspeakers also meant that the audience could mix it live. People got it immediately and started walking in search of different acoustic niches of the place. But also the music itself. It looked a bit like a live installation with balance of voices depending much on the listener's position. What you hear on the recording definitely is a Marcus Schmickler position – in Cologne.

But one thing about the amplification struck me the most. Five of the musicians arrived an hour before the concert, after few hours of flying to Warsaw and then 6 hours of driving to the distant lake area of Northeast Poland. What is the link? Many things have been said about MIMEO and how XXI Century they are, how up to date is everything they do with all the electronics, ways of communicating etc etc. But in Wigry the feeling was also that it was all very easy and simple. No complex amplification systems, no labyrinths of cables and no rehearsals – just a raw, very basic meeting of people who come, plug in and play.
Autor: Michał Libera o 00:48 Brak komentarzy: