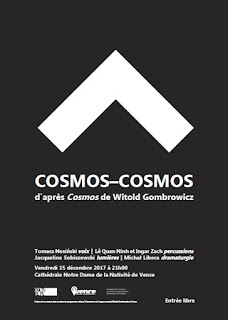 The performance is neither a theatre piece nor a performative reading. It is musicality of „Cosmos” staged for one actor, two percussionists and light design. Gombrowicz meticulously worked out the relation between the book's topic and rhythmical / melodic aspects of the text and thus hearing „Cosmos” can be of relevance here. The main concept is nothing more nor less than putting to front the sonic features of the written text in its relation to its philosophical content.

”Cosmos” can be seen as a treatise about separation of (always too many) things and their arbitrary pointing to each other or, in other words, a masterpiece on how things become signs. Separation of things, musically speaking, is called „staccato”. Pointing towards each other – „legato”. Thus the main idea of the performance is to express and complicate relations between the two musico-philosophical elements of cosmos – being separated and at the same time pointing.

The structure of the performance mirrors the above mentioned diagnosis. It presents a few initially separated “objects” taken from the book. These are:  Sparrow, Stick, Cat, Ludwik and Priest in their staccato positions in “cosmic reality”. In between these things, there is an intermediary, legato, a connection maker which is yet another “object” of the book – an Arrow (“today, ex post, I know it was the arrow that was the most important” Gombrowicz writes and it is because Arrow stands for pointing, for bringing elements together). Over the course of the performance, this clear division of parts becomes more and more blurred.

The libretto has been prepared by the use of method Gombrowicz introduced himself in „Cosmos”, namely – departing from various unrelated elements and bringing them together in a seemingly arbitrary way. Surely, the more arbitrary the selection of elements, the more convincing is the display of the perverse nature of cosmos. There is no other way. As Leonard Neuger put it: “The paradox of »Cosmos«: any consistency I find in the novel will make me one of its characters”. The libretto thus is a perverse, cosmic (in Gombrowicz's sense) perspective on Gombrowicz's “Cosmos”. Hence title: “Cosmos-Cosmos”.
Autor: Michał Libera o 07:09 Brak komentarzy: