All around death, the horizon 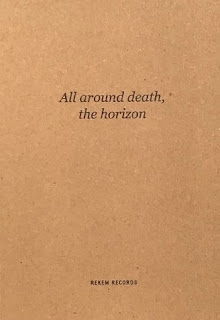 Various Artists - All around death, the horizon

Rekem presents the last part of an informal trilogy of 'fairy tales', conceived and edited by Nicolas Malevitsis. Between musique concrète soundtrack, sound poetry, and abstract narration through instruments, recordings and electronics, a puzzle of storytelling and images is formed - one which takes as its starting point the legacy left by the twentieth century in the mountainous communities of Central Greece.

The words fairy tales are found in quotes, although perhaps their use here stays close to their deeper meaning, as the project essentially revolves around the paths through which experience is woven and imprinted through narrative. Based on the human voice and its echoes over the years, the compilation here confronts themes such as destruction, death, and how they are inevitably transformed into points of rebirth in memory. Works by: Dimitris Karageorgos, Jaap Blonk, Michael Barthel, Martin Küchen & Michał Libera, Artificial Memory Trace.