AN INSTITUTIONAL OPERA IN THREE ACTS 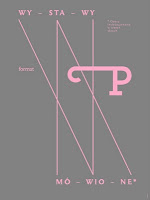 Live audio drama called "Spoken Exhibitions" is devoted to forgotten, overlooked or mythologised chapters in the history of Polish culture during the 20th century. Together with the accompanying publication, this act can be experienced as a curator-led tour of a non-existent exhibition – gathering myths, “phantom” works and unverifiable eyewitness accounts, all related to the never-realised 20th century musical, architectural and artistic pieces. Here, traditional exhibition space is renounced in favour of auditoria, conference halls, offices, warehouses and radio waves. "Spoken Exhibitions" stage something of a hilarious and unceremonious “institutional opera”, or an expert lecture.

The audio drama in three acts draws its inspiration from the artistic attempts at the “dematerialisation” of the work of art and experimental exhibition forms of the 1960s and ‘70s. The narrative centres non-mainstream projects, familiar only to a handful of specialists, in art, music and architecture – projects never carried out or missing documentation. "Spoken Exhibitions" are a textual collage divided into roles, composed of both existing and imaginary notes, manifestoes and postulates of Polish artists. The floor is given primarily to avant-garde stances, and the evoked works are always “impossible”, visionary and well ahead of their time.