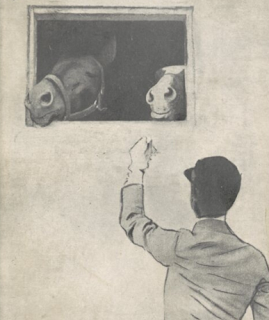 Part of Listenings. Concerts to be toured, curated by Emilia Sitarz

"Systematics ..." consists of monkeys, dog (singular or plural), mouse, cockroach or vexator, vulture, horse from Elberfeld, too large mole, carnivorous ox, snake, two canaries, several still unnamed specimens and - perhaps - human being. What connects them is the inability to produce their own food. A completely trivial, mundane feature of all animals - they are not self-sufficient; they are dependent on their surroundings; they need the world, even if only to eat it. Perhaps this duality goes beyond metabolic levels. At least that's what the title hero of "Investigations of a dog" by Franz Kafka thinks. He believes that the theory of nutrition should be enriched with the theory of music, "the theory of singing that evokes food." This dog is starving by the way, and the song he is interested in is silent, inaudible, imagined, maybe it is not a song at all, though if it was a song and he was the one to sing it, a special kind of supra-human listening would need to be developed in order to hear it. Or sub-human perhaps. It is this kind of listening that is the real topic of "Systematics ...".

Hi, are you the author of "Ampliying Sounds. Technology of Delivery-Early Amplifiers, Mutes and the Politics of Volume"?

I want to quot this text but I can't the reference. My name is Ana, I'm a mexican athroplogist.

hey, yeah, can you please write me on michal.libera@gmail.com?
thanks
ml

The 'arrangement of steps' are methodical and not heedless. Irregular acts produce arbitrary and dubious outcomes. full annealing In deals, arbitrary acts can be utilized every so often, however an orderly and very much characterized accepted procedures approach can guarantee unsurprising outcomes.

It's Not About Power and Politics; It's About Principle and Process - A Lesson in Leadership