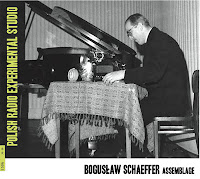 Question number one: once the score is missing, can "poliversionality" mean improvising the soloist part upon listening to a fixed tape? (see: Heraklitiana - composition for tape and soloist of which score is possibly still existing but few months long search, including interventions of its author, gave no result). Is the definition of "poliversionality" wide enough to include a tiny mistake in a playback of a tape during a live performance? (see: Proietto, composition for tape and soloist – during the concert in 1994 in Zachęta Gallery played back a semitone lower than expected). If a close listening to an “original version with a score leaves a lot of doubt about the faithfulness to the score, must other – more loose – versions be mere variations? (see: o.t. dec. 2011 by Thomas Lehn). And the last one: does changing of the title free us from an obligation of a faithful performance or is it only a misuse introducing a new author to a performance which is nothing more but one of the possible realizations of Schaeffer’s compositions? [ML / MM]
Autor: Michał Libera o 11:49